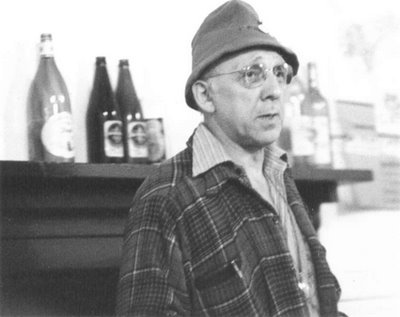 After Ivor Cutler died on March 3rd 2006 I was asked to write about him for Scotland on Sunday. Cutler was and still is a major influence on me. Here’s what I wrote then about Mr. Cutler- 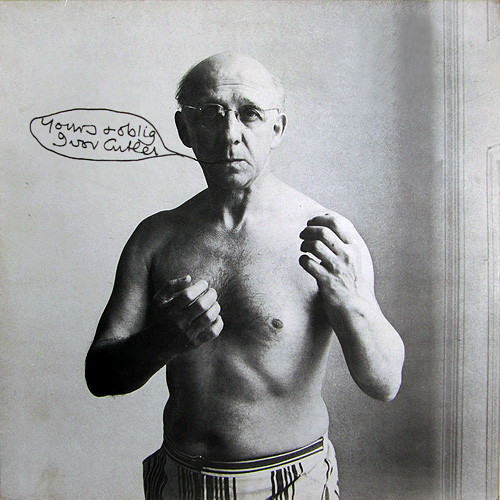 In 1983 I was studying pottery at Cardonald College in Glasgow, but much of my time in class was spent drifting away, daydreaming about girls and getting to make recordings of the primitive little songs I had been writing.

One day I decided to drift away for real as a friend who was working at the Virgin Megastore near Central Station in Glasgow had tipped me off that one of my heroes was making a personal appearance there. Ivor Cutler had become almost a regular fixture on the John Peel show and so I expected to see masses of fans queuing under the Heilanman’s Umbrella, hoping for a peek at the great man.

But I saw no queue. Maybe it was cancelled? Damn. But just in case, I wandered into the shop. As I entered, I saw the usual ultra-cool pretty girl, all in black, too much eyeliner and gelled hair at the checkout. Next to her was a little old guy looking rather sheepish and awkward, wearing a stripy jacket and a corduroy cap, with lots of badges on both. It was Ivor Cutler. No one was speaking to him, not even the ultra-cool checkout girl. I could feel my heart speeding up, my palms get sweaty and my saliva turn thick and sticky.

What would I say? Well I was lucky here because my groovy ex-high-school geography teacher knew about Ivor and told me he’d seen him in Edinburgh as a student. He explained that he approached the great man and said: “Hey, Ivor,” only to be met with a curt: “Mr Cutler to you, I don’t believe we’ve been properly introduced.”

I stepped forward. “Mr Cutler, I just wanted to say hello.” He smiled a little smile at me and his pale eyes twinkled behind his steel rimmed glasses.

“I’m glad you did. I was beginning to worry,” he said.

It was the same dry tone that I heard daily on his albums and Peel sessions. He wasn’t smiling now, but his eyes were still twinkling. I had made a little fanzine out of A4 photocopied sheets of silly poems and stories with my friends Hugh Mclachlan and Norman Blake, who went on to form the band Teenage Fanclub, and I took one out of my Sesame Street satchel to give to him as a present. I explained how we’d been inspired by his stuff, but as I tried to hand it over, he raised a hand to stop me. “Before I accept this, would you read one to me please?”

I chose Never Trust A Fish, a poem about a fish wearing a false moustache stealing my baby and me being left on my own. It always made Norman hoot with laughter no matter how many times I read it. After I finished there was no laughter just a warm smile, the twinkle and: “Thank you, that was lovely. I felt quite at home with that. Now I must give you something.”

He handed me some little golden stickers with little Cutler-esque sayings on them like “To remove this label take it off” and “Slightly inperfect”.

Mr Cutler – having met him, Ivor to me – died “peacefully” at home at the age of 83 last Monday, and it feels a bit like the end of an era now he, John Peel and Vivian Stanshall are all gone. Born in Glasgow on January 15, 1923, I always described Ivor Cutler as the greatest living Scotsman, even though he claims his life only really began when he left Scotland to take up a teaching post at AS Neil’s radical free-thinking Summerhill School in Suffolk. Describing him as the greatest dead Scotsman doesn’t have quite the same ring to it. I’m not sure how I should subtitle him now.

For those unfamiliar with Ivor Cutler and what he did that was so unique and remarkable, he was a poet, songwriter, singer, artist and storyteller. He sang and spoke of a joyless childhood lived in a Scottish sitting room where the weather outside was eternally dreich, about men with woollen eyes and about lots of bugs and insects. He created an absurd and funny universe that, though ridiculous, always seemed real and sincere. There was a duality: he could make you laugh until you wept, but also touch your heart with a deep melancholy and a pure melodic beauty.

His songs, ‘Beautiful Cosmos’, written for his long-time partner Phyllis King, and ‘Yellow Fly’ – even though it is about, well, a yellow fly – are as great as any hymn to love that the Gershwins, McCartney or Bacharach & David ever wrote. Another contradiction in Cutler’s work is a sad world-weariness married with a childlike sense of innocent wonder.

For Cutler, leaving a teaching post in Paisley where he was expected to beat the children into learning with a leather belt, and then moving to Summerhill, which he described as being “like fairy land” where he was encouraged to make the children laugh and sing and smile, was a move that reassured him it was okay for him to think the way he did.

I’ve heard people saying that he changed the way they think. It wasn’t like that for me. It was more like his time at Summerhill was for him, it was finding something that reassured me that it was okay to think the way I did and to follow my own path. It gave me a licence to be an adult-child and not to do the done thing.

When I wrote the words and melody for what was to become my group BMX Bandits’ first hit, ‘E102’, 20 years ago, it was Ivor Cutler’s voice I heard singing it first in my head. By the time I wrote our next single I felt I could hear my own voice and I think that was partly thanks to Ivor.

After being discovered by writer and raconteur Ned Sherrin, Ivor confused and amused the public en masse via a week-long residency on Cliff Michelmore’s Tonight programme in the late 1950s. He started to make some recordings and continued appearing sporadically on the telly, where he was spotted by Paul McCartney. The then Beatle was impressed and invited him out for dinner. Ivor accepted and they struck up a kind of friendship that would lead to Cutler appearing as Mr Buster Bloodvessel, the unlikely romantic lead in The Beatles’ Magical Mystery Tour and to an album by the Ivor Cutler Trio being produced by the Fabs’ studio guru, George Martin. The resultant record, Ludo, is still my favourite of Ivor’s, it has such a dreamy quality.

Despite never being definably ‘rock’ in any way and being a committed member of The Noise Abatement Society – he would instruct the sound crew at concerts mid set thus: “Quieter, much quieter”; and request that the audience clap at only 50% of their normal volume – Ivor was often most championed by figures from the world of rock. Recently Franz Ferdinand’s Alex Kapranos spoke of the influence of this unique talent.

Ivor recorded more John Peel sessions than anyone except The Fall, and appeared on Robert Wyatt’s seminal Rock Bottom album. This resulted in him securing his own three-album deal with Virgin, in Wyatt covering Cutler’s song ‘Grass’, and in me meeting him at a Virgin megastore 23 years ago.

It may seem surprising that Cutler’s peculiar songs would work with anyone else singing them, but they do. Jim O’Rourke, Mercury Prize nominee Kathryn Williams and our own Alasdair Roberts have all recorded Cutler songs and they perfectly adapt to their individual styles. If you look behind the absurd lyrics they are very elegant, highly melodic, simple and direct.

And it’s not just musicians who have been inspired by him – Bertrand Russell, Billy Connolly, Will Self and Stephen Fry are all fans. And, of course, he’s not just for grown-up brainy types either. My 11-year-old son can spend whole train journeys reciting Cutler, giggling and smiling all the way.